Difference between revisions of "LOWW Primer"

This document is intended as training and reference material for controlling Vienna Airport (LOWW). This page is work in progress. If you are controller: Feel free to discuss and edit.

If you are a Pilot: The page Vienna is a better source for you, with more info on flying airplanes and less on controlling.

The structure of this document follows the stations to be manned: DEL, GND, TWR, APP.

Vienna has two runways, which flight paths cross. Still, the airport has frequencies which make parallel operations necessary - therefore, Vienna has developed a set of special rules and practices on how to use them.

(see the ground chart [which you find here]).

Vienna has three piers with gates and some stands around. From West to East, there are:

Besides to the East, there are stands for large aircraft - currently the only places for the A380.

Delivery in Wien is straightforward as described in the Study_Guide:Delivery. Bear in mind the following factors:

Ground position in Vienna is somehow complicated. Why? Because traffic flow changes with runway configuration, and sometimes traffic flows left-around.

With strong westerly wind and after 21:00 local, 29-only is the option. This the option for minimizing conflicts:

When wind is Northwesterly, then departing 29 and arriving 34 is an option.

There may even be departures from 34 in this ground flow configuration. Traffic flow could be as follows:

Vienna has a local procedure to have quasi-parallel operation of runway 11 and 16. In this configuration, aircraft depart from 16. Arrivals are 11 and 16 depending on traffic and aircraft class (Heavies cannot approach 11 if 16 is open, as go-around paths would cross). Taxiing is somehow complex in this situation:

You could handle the flow like this, which will turn L and M to left-around to minimise conflicts. There is a hot spot at EX23, where outbound and inbound traffic cross. However, departing traffic will be able to see departing on their right hand side, so you can work with conditional clearances ("give way to crossing traffic from D at Exit 23").

When the wind is low, but southerly, then 29-16 is a good option. This is how you can handle it:

Runway 16/34 crosses the final approach for runway 29. The ILS beacon for runway 29 runs right across taxiway E, D and the runway.

This means, that there is no traffic allowed on the relevant sections of D and E, if there is any aircraft in approach for runway 29 or in departure from runway 11 (they use the ILS too). There are intermediate holding points (in the chart: "IHP"), conditional clearances must be issued: 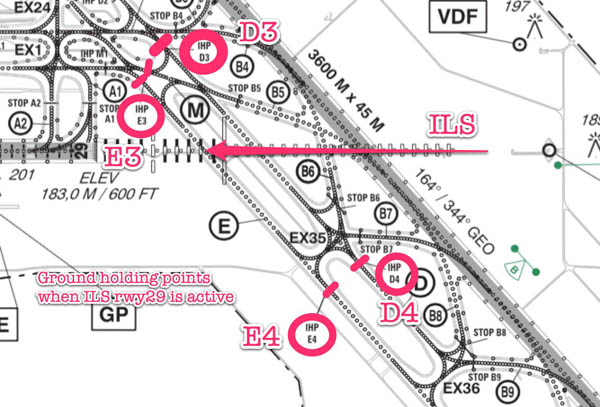 The runway utilization concept for LOWW is based on the fact that the airport layout with it's crossing runways normally does not allow simultaneous approaches to both runways. So, whenever possible, runways 11/29 and 16/34 will be used independently to allow departures on one runway (normally 16 or 29) while using the other runway for landing aircraft.

>>> SE winds, if no simultaneous approach possible. Caution: No departures on 16, if extended centerlines cross. Whenever an aircraft is on short final 11, departures from 16 have to wait, until aircraft has touched down and safely slowing down.

>>> calm/NW winds - undisturbed two-runway operations, as centerlines do not cross.

>>> calm/SW winds - undisturbed simultaneous operation, as centerlines do not cross.

>>> calm/NW winds - undisturbed two-runway operations, as centerlines do not cross.

>>> calm/SW winds - undisturbed simultaneous operation, as centerlines do not cross.

>>> calm/SE winds, simultaneous approach possible. Caution: The go-around paths cross: Arrival sequence on rwy 16 has to be 5nm. Arrivals and departures from 16 must be synced with arrivals on 11 to avoid conflicts. Quite a challenging configuration, to be honest.

Simultaneous approaches to runways 11 and 16 are conducted only at tower's discretion during certain weather conditions (visual reduction of separation). Aircrews are advised to show landing lights as soon as possible.
In case of technical uncertainties during final approach - that might be possible lead to a missed approach - aircrews are asked to inform ATC immediately.

With Low Visibility Procedures in operation, standard approach runway will be runway 16. Arrivals will be vectored out of the holdings into the left hand circuit for runway 16. Approximate track distance from the holdings to touchdown shall be calculated with 40 to 70 nautical miles. Runway 29 is also equipped with a CAT IIIb ILS.

Intersection takeoffs can be granted by GND in coordination with TWR and in accordance or on pilot’s request.

VFR traffic can enter/leave the control zone (CTR) via sector SIERRA (to the south), sector ECHO (to the east) and along the Danube river on the route Klosterneuburg – Freudenau. Maximum altitude in these sectors is 1500ft or according to the VFR charts published online at www.vacc-sag.org.

LOWW is located very close to the Austrian state boundaries with Hungary, Slovakia and the Czech Republik and space within the TMA (Terminal Maneuvering Area) is very limited.

LOWW_APP itself operates up to four different sectors, depending on the amount of traffic. The Split are nearly the extendet runway centerline of all 4 runways. The arrival sequence by transferring arriving aircraft to the Director, who issues vectors onto the final approach track and sets up a safe flow of landing traffic. Unless otherwise instructed, initial contact on Director frequency (normally 119.800) shall be made by stating the callsign only in order to reduce frequency load.

When the appropriate spacing is assured until touchdown, Director will transfer the arriving aircraft to Tower.

Approaches using "Own Separation". Visual Approaches will be issued whenever the traffic situation permits. Due to several noise sensitive areas in the vicinity of Vienna Airport, LOWW_APP has to impose certain restrictions on visual approaches: