From VACC Austria DokuWiki
Jump to navigation Jump to search

This Study Guide has been designed to give you all the information needed to start controlling as a Clearance/Delivery controller on the VATSIM network. It assumes, that you have read and understood the Study Guide:OBS before and have logged in as observer.

Clearance Delivery is responsible for checking and correcting flightplans of departing aircraft and issue routing clearances to them. This task may sound boring, but is important for upstream controllers: Clearances take time (on the radio) and may block vital commands (like takeoff and landing clearances), and radar stations rely on the checked and cleared values (SIDs and clearance altitudes) for their controlling. If DEL makes mistakes, APP will have trouble.

There are 2 types of flight plans at VATSIM:

Flight plans are documents filed by pilots with the local Civil Aviation Authority prior to departure. They generally include basic information such as departure and arrival points, estimated time en route, alternate airports in case of bad weather, type of flight (whether instrument flight rules or visual flight rules), pilot's name and number of people on board.

At VATSIM, flight plans are filed with a VATSIM server.

Aircraft routing types used in IFR flight plans are: Airway, Navaid and Direct. A route may be composed of segments of different routing types.

For VFR flights, the only purpose is to provide needed information should search and rescue operations be required. At VATSIM, a VFR flight plan is handy for controllers, as it shows vital information with the airplane tag on the radar, like the destination.

Syntax for IFR flight plans is quite strict, and pilots are encouraged to look up flight plans via online tools and paste the code into the routing field. The format is usually <waypoint><via><waypoint><via>, where every waypoint is noted, where the itinerary changes from one route to another (waypoints on the same airway are omitted). This is necessary, as radar clients (Euroscope) read and interpret this data.

Example: A valid routing from LOWW to EDDM is the following:

So far we have specified the lateral dimension. To further specify the vertical aspects a speed and level segment has to be attached to the RTE string:

For flights which will remain in lower airspace i.e below the transition altitude the following is used:

A "/" is used to attach such a speed and level group to a waypoint e.g:

The guiding principle in choosing the active runways is that aircraft prefer to depart and land into the wind.

Look at a more complicated example:

Beware: All major airports have preferential runway configurations which depend on approach configuration, noise abatement and terrain.

Generally, tailwind components of up to ten knots are accepted.

However due to noise abatement and terrain considerations most airports have some kind of preferential runway system. Bear in mind that it is the pilots decision whether he can accept a certain runway because only he knows the performance of his aircraft.

For details on the preferred runway configurations for a specific airport ask your mentor or look into the airport QRS (quick reference sheets). See in the Resources section at the very bottom for links to them.

ATIS stands for Automatic Terminal Information Service and is a usually automatically generated broadcast that contains essential information for pilots. It is continuously broadcasted on a dedicated frequency. On initial contact with the controller, pilots should already have listened to the ATIS and state the identifying letter.

An ATIS broadcast consists of:

It is updated every 30 minutes or as soon as significant changes occur.

Euroscope has already selected the first matching SID in the alphabet. Check, if this SID is applicable to the aircraft type, performance, equipment and time (you might want to check with APP to clarify, which SIDs are correct), and select the best SID.

If a filed routing is invalid or the decision to revise an A/C routing has been made by you it can be difficult to communicate this change in RTE to the pilot. In an ideal world you would reroute an A/C before it calls you, thus avoiding unnecessary discussions on frequency. It is therefore suggestable to make use of private messages for this special case.

By sending the message in this format you can reduce the likelihood of a possible discussion as it resembles an automatic message.

Do not forget to also amend the ATC FPL in Euroscope.

DEL gives routing clearances to all departing aircraft with the following information:

Normal construction of a routing clearance:

Some Aircraft are not able to follow SIDs for various reasons, most of the time due to missing equipment.

Vienna is equipped with a NON-RNAV SID -> the SNU departures. Any IFR equipped aircraft is sufficiently equipped to fly this SID, even if it has no FMS. This is your safest bet if a pilot has an old AIRAC or is simply unable for anything else.

If you issue such a clearance you will need to connect the SID, in our case SNU2C, to the filed RTE. First filed waypoint would be SITNI - this is issued as follows:

If the pilot responds with a correct readback you should answer with the following phrase:

Upon receiving the ready call - you may handover to Ground

This is done to keep the A/C on your Frequency until it is fully ready to move. By doing this DEL has the chance to communicate any RTE or Slot changes should they arise, thus reducing workload for the GND Controller.

The Tower is responsible for VFR traffic. However, pilots have to contact DEL for clearance. You have to enquire with Tower about the details of the departure.

- runway to expect (VFR is not bound to the active rwy)

As Mode-S transponder are mandatory in Austria, using the VFR squawk 7000 exclusively is sufficient.

An IFR Flight does not necessarily have to terminate at the destination Aerodrome.

To clear the following flight with destination LOAV:

the following phraseology is to be used:

As MOVOS is the clearance limit you may not clear an A/C any further. The flight is then expected to hold at MOVOS if not instructed to continue.

Sometimes one of your neighboring sectors has to stop accepting traffic. In these cases you should delay an aircrafts start-up clearance.

If possible you should inform the pilot about the expected delay:

Add 2 mins for each waiting aircraft.

If the traffic at your departure airport is increasing even more, delivery may need additional ressources to manage all calls. In this case a second person (Delivery Coordinator) is required. Splitting the workload between the current Delivery Operator, who is solely responsible for voice transmissions (to prevent unnecessary step-ons due to two controller talking) and the Coordinator is the key here:

--> Coordinator is in charge to send the pilot a message

--> Coordinator assigns a slot in the webbased tool (earliest CTOT now +15min, to take Push and Taxi into account)

--> Operator clears the aircraft for IFR

--> Operator checks the stand (DEP List or radar screen) and handover the pilot to the corresponding GND frequency (121.6 or .775)

In order to guarantee a safe flow of traffic and to minimize delays in the air so called slots are being used. A slot is a timeframe of five minutes before to ten minutes after the CTOT (Calculated Time Of Takeoff) mentioned before. The aircraft has to depart within this timeframe from its departure airport. On the VATSIM network this system is only used on special occasions.

Responsible for Slot coordination in RL is the CFMU called "Central Flow Management Unit" in Brussels.

The webbased slottool (as of 26.11.2021) allows for drag and drop assignment of aircraft to certain slots: 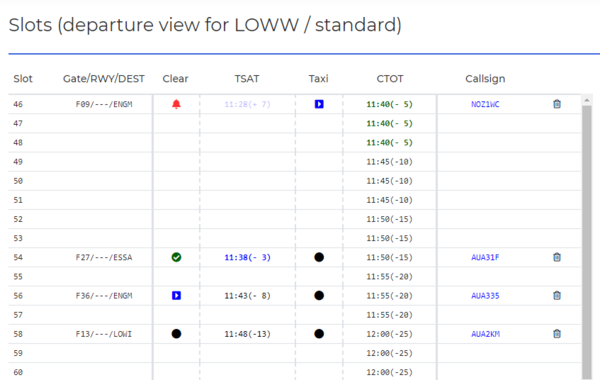 While there are identical flags for clearance and taxi as in Euroscope, there is no connection between both systems. Therefore a plugin SLOTHEL has been developed, to get at least the information of slot-times from the tool into an active controller session (see below, second column from right)

You have to adapt the DEPList settings (F button on the top left corner of the list) and select the SLOT-column.

CAUTION: Use the Plugin only in one ES instance, as every instance is triggering a call to the VACC server and too many requests may result in a blocked connection. -> To prevent this, unload the Plugin via ES “Other Set” -> “Plugins”

The data in the SLOT-column are presented in the following formats:

-CTOT- = Aircraft has received a taxi clearance/flag and will proceed to the holding point. It will most likely depart within time

TSAT/CTOT green = Slot is open, aircraft may be transferred to GND for push and start

Pilot: “AUA123, ready for push and start” -- Controller: “AUA123 contact ground on…” OR if the aircraft has not called in yet, and workload permits, the controller can actively call the pilot.

Pilot: “AUA123, ready for push and start” -- Controller: “AUA123, you missed your slot. New TSAT xx:xx, call me again at xx:xx”, after you or your Coordinator has assigned a new slot.

If you really want to study hard, then read the relevant sections for DEL in the official radio telephony guide from Austrocontrol.

A really good index (and much more orderly is here at Eurocontrol.