From VACC Austria DokuWiki
Jump to navigation Jump to search

Ground is responsible for all movements of aircraft on ground, except the movements on the runway. Ground takes over responsibility for Delivery if he is not online.

(see the ground chart [which you find here]).

Vienna has three piers with gates and some stands around. From West to East, there are:

It is ground's responsibility to direct and monitor ground movements

Start-up clearance may be given if you expect the aircraft to depart in a timely manner. (coordinate with GND and TWR accordingly)

Push-back clearance can be given if no other aircraft is passing behind and the parking position requires push-back.

Use these two phrases together

If the aircraft does not initiate pushback within an adequate timeframe, you may cancel the pushback clearance:

Thereafter you may clear anyone else to pass behind, and you have to re-issue the clearance later on.

The pilot will conduct startup and pushback. As soon as he is ready for taxi he will call you:

Depending on the traffic situation you can either clear the A/C directly to the RWY or issue an intermediate clearance:

So, how do you maintain traffic flow at a busy airport?

You may clear an aircraft to an intermediate stopping position: "Taxi via E hold before EX24".

You may also add a condition to this to keep things moving:

This means: the A/C has to "hold before" (=to stop) in mid way for a condition which you specify.

The "Hold before" argument reduces your workload, as the pilot must now judge if they can meet the conditions given.

Bear in mind that it is the controllers' job to decide on wingtip clearance.

On VATSIM, you sometimes meet pilots who apparently don't have charts and/or lose orientation - especially when it is dark and the scenery is outdated. If a pilot starts sight-seeing, you can tell them to stop ("hold position") and to "expect progressive taxi", and that means: you taxi him step by step, and they are instructed to stop at every step.

When an aircraft is approaching its assigned holding-point (and clear of possible traffic-conflict) a hand-off to next higher position (i.e. TWR) shall be initiated as soon as the aircraft is conflict-free in your area of responsibility. This means, if no other aircraft can be in the way on his way to the runway. Example for LOWW: Suppose, RWY 29 - GND will line up all aircraft on taxiway M facing East. Hand them over to TWR as soon as practibale. Avoid unnecessary intermediate stops of taxiing aircraft.

With strong westerly wind and after 21:00 local, 29-only is the option. This the option for minimizing conflicts:

When wind is Northwesterly, then departing 29 and arriving 34 is an option.

There may even be departures from 34 in this ground flow configuration. Traffic flow could be as follows:

Vienna has a local procedure to have quasi-parallel operation of runway 11 and 16. In this configuration, aircraft depart from 16. Arrivals are 11 and 16 depending on traffic and aircraft class (Heavies cannot approach 11 if 16 is open, as go-around paths would cross). Taxiing is somehow complex in this situation:

You could handle the flow like this, which will turn L and M to left-around to minimise conflicts. There is a hot spot at EX23, where outbound and inbound traffic cross. However, departing traffic will be able to see departing on their right hand side, so you can work with conditional clearances ("give way to crossing traffic from D at Exit 23").

When the wind is low, but southerly, then 29-16 is a good option. This is how you can handle it:

The safest and primary way to achieve safe operations:

This provides much more flow, but you have to think in advance. See, which aircraft approach to where and give one of them a conditional clearance to stop some point and give way. Make sure that the condition is clear: a specific intersection, a precise plane from a precise direction, like this:

"Conditional clearance" means: AUA251 is free to taxi until its final clearance limit (D21), but stops inbetween until the condition is met, in this case: another Austrian A320 taxiing (presumably on D) and turning in before him. Then, he is free to continue without instruction. "Hold short" means: You are cleared to your destination, but you should stop inbetween.

Sometimes, you might need to re-clear or stop an A/C:

Of course you have to make sure that this instruction is unambiguous, so there shouldn't be two DLH B737s in the area.

Even though HIRO (High Intensity Runway Operation) requires pilots to plan certain intersection departures e.g (A3, B4, B10, A10), usage of these intersection should be restricted to cases where a gain in efficiency can be accomplished.

Avoid "over-using" e.g A3, as there is no gain in efficiency to be expected from a 3 aircraft long queue for A3 (TFC congestion on TWY M and L).

Some flights do not need the whole length of their given departure runway so they might request takeoff from an intersection somewhere down the runway. This procedure is called a intersection takeoff. You should only grant this in coordination with Tower and if traffic situation permits. Also at some airports intersections are used to be more flexible in the departure sequence (see section Departure Seperation).

Phraseology to ask an A/C for its ability to make use of an intersection is as follows:

As this area is equipped with 3 parallel Taxilines, those being Taxiline 40 Center, Blue Line and Orange Line, it is vital to make use of these Lines in a sensible manner.

Phraseology in this area is as follows:

Positions G16, G26 and G36 are used for Heavy A/C and are collocated with their respective F counterparts F16, F26 and F36. Nevertheless they provide greater wingtip clearance.

Another option to make use of this infrastructure is to clear "swingovers".

This procedure is particularly useful to clear e.g the Blue Line for incoming traffic.

In dynamic and high TFC situations it is advisable to make use of intermediate clearances to keep both your and the pilots flexibility to change route at a maximum. It is therefore suggested to make use of IHPs such as:

Nevertheless you should try to keep the A/C moving and avoid unnecessary stops at these positions if they are of no use to your flow management.

In case the above mentioned slot regulations are in force ground has the responsibility to set up a departure sequence in a way that the aircraft do not miss their slot.

First and foremost, air-taxiing is not done by GND! Permission do so is granted by TWR only in coordination with GND!

Air-taxiing is the Movement of a helicopter / VTOL above the surface of an aerodrome, normally in ground effect and at a ground speed of normally less than 20 KT (37 km/h). Please Note: The actual height may vary, and some helicopters may require air-taxiing above 25 FT (8 m) AGL to reduce ground effect turbulence or provide clearance for cargo sling loads.

At some austrian airports it is very common to use opposite runway configurations (departure and arrival runway are opposite to each other). In these situations it can happen very fast that you have two aircraft facing each other nose to nose. Special attention should be paid to avoid this situation.

As GND controller, you have to watch out for the size of an aircraft. You have two indications for the aircraft size in Euroscope: The Letter "L/M/H/S" in the flight strip, and the precise aircraft type in the departure list or tag - an abbreviation which you might need to google, but you will learn over time.

as hint for parking, you could use follow flow Chart: 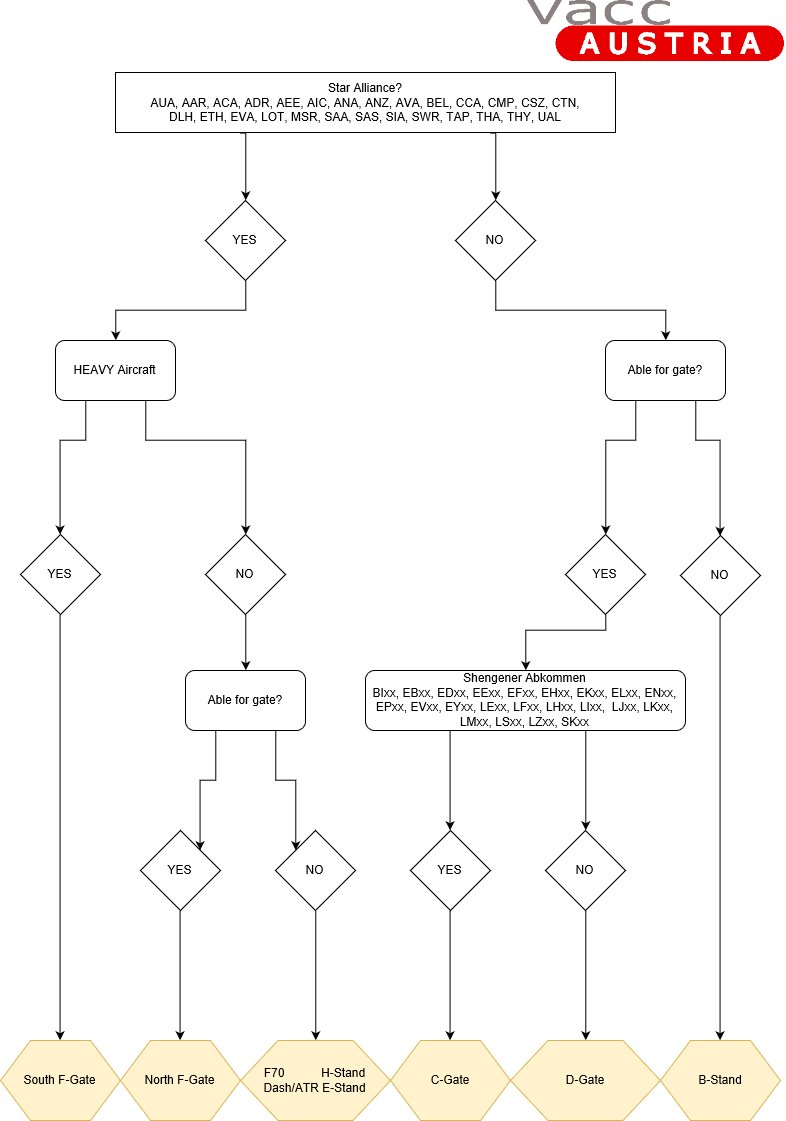 If you really want to study hard, then read the relevant sections for GND in the official radio telephony guide from Austrocontrol.

A really good index (and much more orderly is here at Eurocontrol.